‘re like me, you loved all the Tony Hillerman books.  To honor this famed mystery writer of the Southwest, I’m having library readings at Sonoma County libraries and I’d like to invite you.  As you see, I already had one reading event on September 16th–thank you to everyone who came. It was inspiring! Tony Hillerman (May 27, 1925–October 26, 2008) was an award-winning American author of detective novels and non-fiction works best known for his Navajo Tribal Police mystery novels set in the Southwest. I was very honored that he agreed to endorse my first novel, Sundagger.net, an endorsement that appears on the cover of my book.

When I had finished writing my first draft of Sundagger.net, set in the Four Corners area of New Mexico, I wrote to him to ask his opinion and thus began a correspondence that lasted until he died. I think of him as my teacher, my mentor, and my ally.  As a writer in the world, I want to be how Tony Hillerman was with me–funny, open, giving, generous, very knowledgeable, encouraging, and insistent on practice as the key to success. “Keep on writing” he told me in his letters more than once.

Tony Hillerman influenced me long before I wrote Sundagger.net. In particular, I was drawn to his stark, evocative descriptions of the Four Corners area where the four Southwest states converge–New Mexico, Arizona, Colorado, and Utah. There he set his Jim Chee-Joe Leaphorn mysteries, dipping in and out of  Navajo and Hopi landscapes to unveil and eliminate crime.

Tony Hillerman was the master of crafting a fascinating story. For me, all these 29 books were an “easy” read, pure enjoyment, that put me in touch with the pleasure of life. His Native American characters especially were quirky, comfortable, the kind of down-home people you could relate to–at times grumpy, jealous, self-serving, duty-driven, burdened with work, love lost, but in the end, bigger than all that and always very human. And women held a place of honor and respect.

All the Tony Hillerman mysteries unveiled a Native American point-of-view that opened my eyes to a different, deeper world. Touching on reservation life, they described traditional Navajo ceremonies and medicine men, attitudes toward death and burial, as well as political and social issues that affect us all in the bigger community, for example, the stealing of antiquities, illegal aliens, drug dealing across borders, and the embezzlement of billions owed by the federal government to the Indian nation.

Each book embraced a dimension I can only describe as quietly spiritual, based on venerating the magnificence of sky and earth. This was recently illustrated in a new coffee-table photography book, Tony Hillerman’s Landscape, written by his daughter, Anne Hillerman, that I refer to in my reading events.

Here’s a letter Tony Hillerman wrote me that I display on an overhead projector. In it, he points out different attitudes of the Navajo about modern individuality based on their Changing Woman origination story. 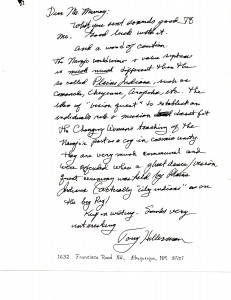 After receiving this letter, I revised a chapter in Sundagger.net where a group from the San Francisco area set out on a camping trip to experience a vision quest of their own and end up in Chaco Canyon, New Mexico, home of the ancient Anasazi. During my event, I talk about the letter and read sections from the chapter.

Please join me to honor a master of story-telling.

You are  invited to bring your favorite Hillerman book–and  to read an excerpt aloud to our audience.

Hope to see you at the library!

FREE AND OPEN TO EVERYONE.